Democracy, Peace, Reconciliation: A New Horizon for Canada’s Senate and House of Commons

In 2020, the Government of Canada launched an international architectural design competition to transform Block 2, a prominent urban block located directly across from Parliament Hill in Ottawa, into an innovative complex to meet the needs of Parliament and the public.

Every architectural gesture on Parliament Hill is inescapably tied to a seminal moment in Canadian history. The first architectural act on The Hill in 1867 established a sophisticated grouping of neo-Gothic buildings seeding a parliamentary democracy in alliance with the British Crown. The second significant gesture, the 1920 Peace Tower, rose in the aftermath of a devastating fire and a world war. The third, the modernization of workplaces for Canada’s Senators and Parliamentarians, comes at a time when the important fourth face of Parliament Hill is conditioned by a conversation about reconciliation. It is our strong belief that the fourth face can provide a healing gesture of reconciliation in this space of national dialogue.

Bold Approach to Program & Site
Our team’s vision for Block 2  sought to serve as a significant starting point for engaging Indigenous groups to evolve a design that considers both the physical context of the site and its broader cultural context. Our team proposed to relocate the Indigenous Peoples’ Space (IPS) from the gifted site of 100 Wellington to the site’s most lofty perch—the seventh-floor bridge. This gesture is one of reconciling in anticipation that this Indigenous-designed space will become an epicenter for dialogue and gathering. The historic colonial edifice of 100 Wellington is re-purposed as a dignified entry for Senate offices to the east and Parliamentary offices to the west.

Parliament Hill’s fourth face takes the form of an undulating and transparent wall that respects the historic character of 100 Wellington and the Union Bank exterior, containing offices and meeting spaces for members of Senate and Parliament. A forest-like structure of wood and steel columns supports the bridging ribbons of the IPS, expressively curving to face Parliament Hill to the north, and more subtly nestling in behind the retained and restored facades of the historic buildings on Metcalfe and Sparks Streets. The focus on enduring design favours high-quality, timeless Canadian-sourced materials that resonate with all Canadians.

Bridging to Reconciliation
The design intrinsically expresses principles of Indigeneity in its connection to the earth, its emphasis on space to gather, and its views to nature, the river, and the hills beyond Parliament.

The accessible roofscape above the IPS is ascended by a spiral ramp, offering an uplifted vantage point from which to reflect on Parliament Hill, the city, the river and the sky—and the higher aspirations of Canadian democracy. The design is about reconciling relationships, and a newly balanced disposition of program—including the IPS—in its right place within the historic block, for the common good of all. It proposes a universally accessible public landscape from earth to sky for Canadians and visitors from around the world.  Symbolically, it speaks to a journey of walking side by side on a parallel path for Indigenous and non-Indigenous visitors (to the seventh floor) and the public (to the roof). We propose further connecting sustainability to Indigeneity by powering the building with renewable energy originating from Indigenous communities through a community benefits program.

Urban Design and Landscape Vision
The long-term landscape vision for Wellington Street and the Parliamentary campus looks holistically at pedestrianizing Blocks 1, 2, and 3 with a red granite carpet that extends a

ceremonial character across Wellington Street and slows vehicles by removing a lane of traffic. Widely spaced red maples are planted in the linear soil bank with room to grow north of the sidewalk and stone wall, while the granite surface of the site’s plaza visually extends inside the building. The streetscape vision for Sparks Street is to foster everyday diversity, preserving the scale and character of its historic façades and prioritizing accessibility to retail. The “Curvilinear Option” from the Sparks Street Public Realm Plan is adopted, and new streetscape elements introduced.

Heritage Strategy
In order to maintain a sustainable future, the team’s design includes a heritage strategy to rehabilitate historic buildings to their authentic purposes. This approach will serve as a baseline for retrofit to meet contemporary safety and building codes, providing high levels of functionality in workplace design, dignified and secure entrances and workplaces, with barrier-free paths throughout. Integrated mechanical and electrical systems compatible with historic building envelopes ensure sustainability. The historic importance of Block 2 lies in its relationship to Parliament Hill, across from the designated landscape and architectures of East and West Block, Centre Block, and the Peace Tower.

Sustainability
Key strategies to increase resilience of the project include: high-performance façades to minimize energy required for maintenance of interior environmental conditions, natural ventilation to allow the building to continue to be habitable in the event of failure of mechanical systems, and an extensive green roof to provide thermal mass and abundant stormwater retention and management capacity. HVAC system innovations prioritize passive ventilation and a heating/cooling system that will have the flexibility of switching between natural and mechanical depending on season and usage. Materially, the project proposes the use of Canadian-sourced timeless materials, low embodied energy, and life cycle costing considerations govern choices such as mass timber, granite, recycled steel. 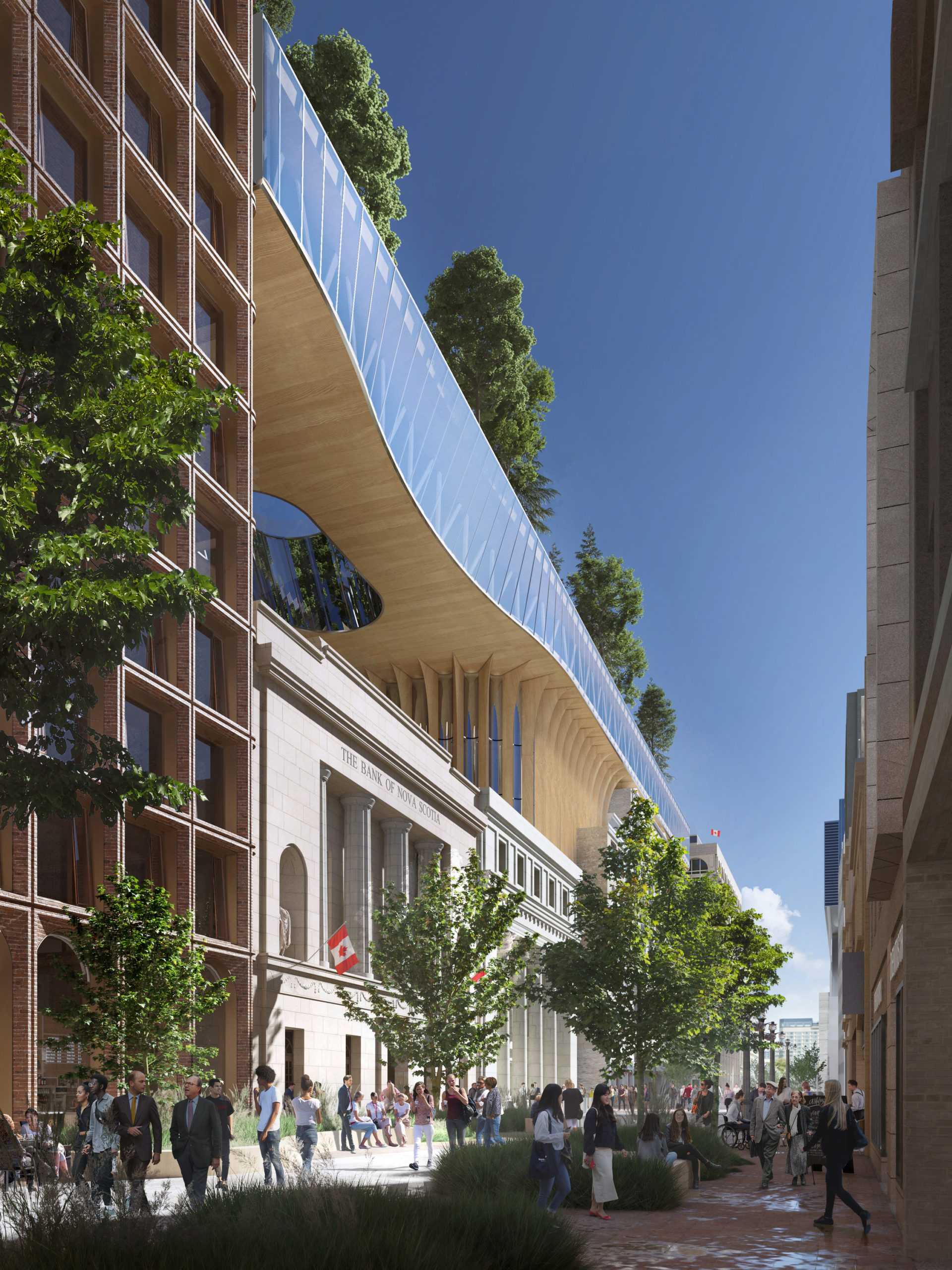 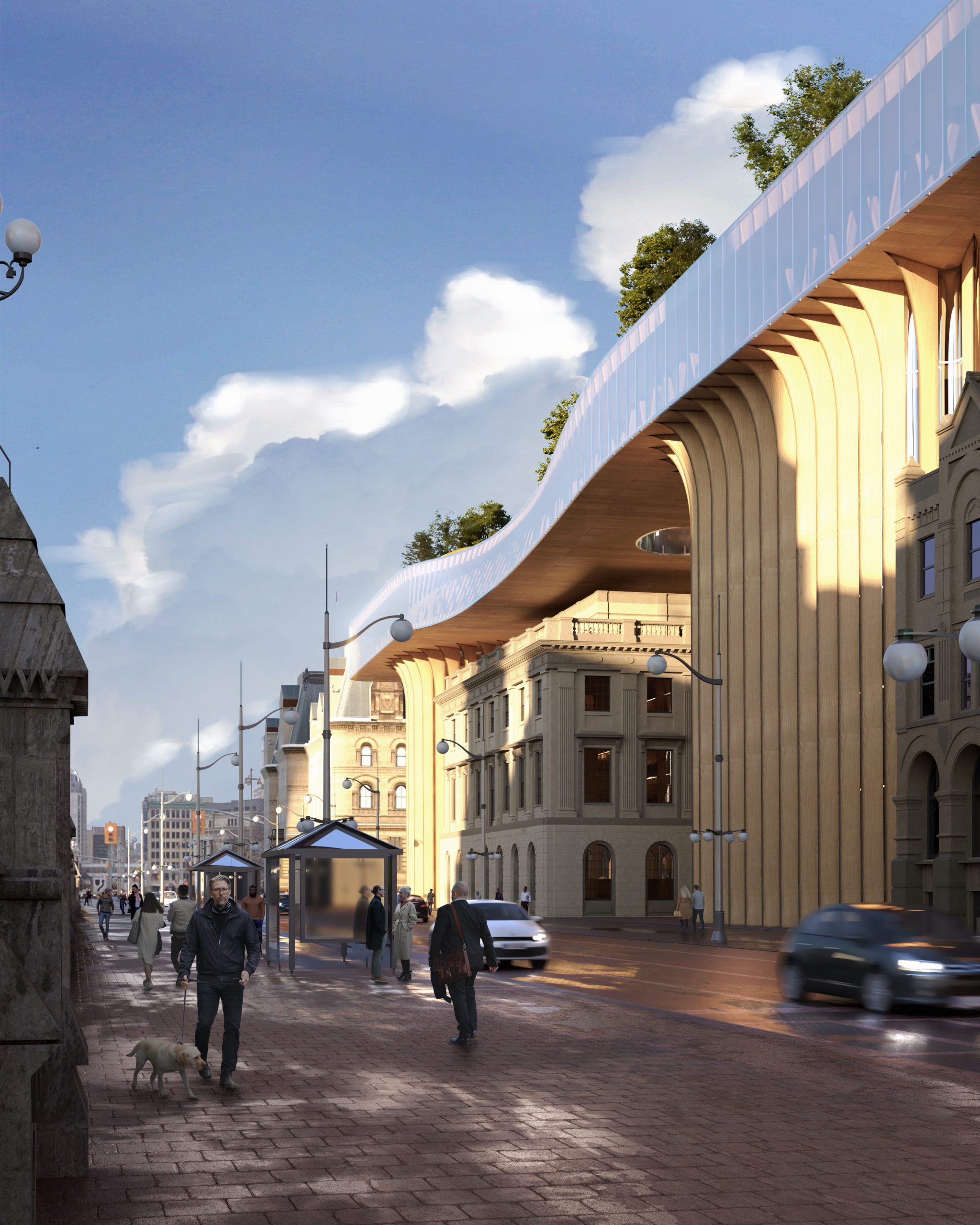