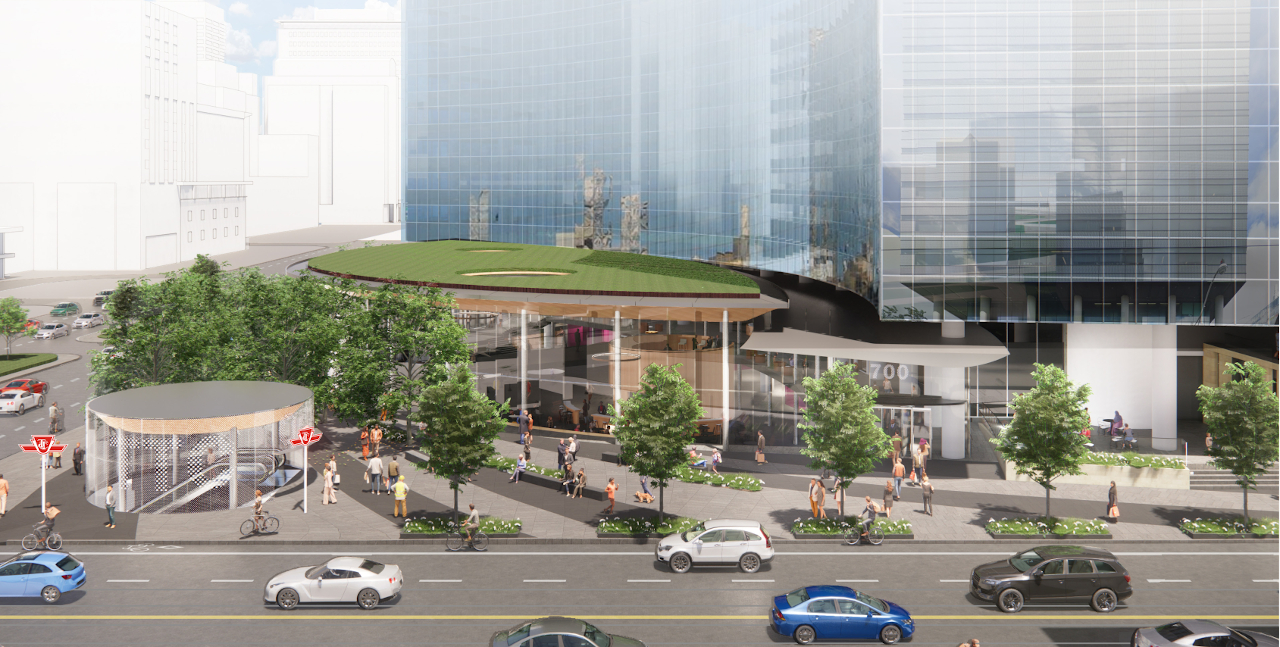 A unique proposal in the heart of downtown made a good impression at its first appearance in front of Toronto’s Design Review Panel in January, 2021. KingSett Capital is proposing a major redevelopment of their property at 700 University, home to the Ontario Power Building, the 1976-built structure on the corner of College and University known for its monolithic curved glass facade. Led by KPMB Architects, the project comprises a retrofit of the existing office building, which includes a reconstruction of the plaza in front of the building and the addition of 5 new floors, along with a new 61-storey rental residential tower constructed on the southwest corner of the site.

The Panel was impressed by several aspirations of the project. First, the retrofit of the existing building is aiming to transform it into a carbon-neutral structure. Now approaching its 45th anniversary, the building systems are in need of an upgrade, and KingSett has seized the opportunity to set an example for sustainable rehabilitation of existing office towers. As well, the rental tower is targeting Passive House performance.

As part of the retrofit, 5 new floors are being added on top of the existing tower, creating 30,000 square feet of new office space. As well, the top level is a partial floor that will contain a conference and event centre, similar to that installed on the top floor of the Globe and Mail Centre, which has proven to be quite successful.

A second aspiration of the project that the Panel applauded was the introduction of residential uses to the property, converting a commercial and retail property into a true mixed-use development. The 61-storey residential tower will replace the low-rise service and back-of-house area on the southwest corner of the property, facing onto the narrow Orde Street. Containing 531 rental units, the tower takes on a unique triangular form due to the shape of the site, and would provide much-needed housing for nearby healthcare workers, long-term hospital visitors, and students.

The final and perhaps most impactful gesture that the Panel was very excited about is the plan to completely remake the public realm around the building. Currently, a series of sunken courtyards cascade down from street level along University, while the main entrance to the office tower is raised above street level, creating a largely concrete landscape that is not accessible and does very little to animate the streetscape.

KPMB have proposed to erase much of the Modernist hardscape and replace it with a curved low-rise pavilion, convex in juxtaposition to the concave tower facade above, which will serve as the main entrance to the building. The pavilion pulls away from the intersection, creating a large street-level plaza with planting that greatly increases the pedestrian realm. The entrance to the Queen’s Park subway station will remain at its current location, housed within its own small stand-alone pavilion separate from the building in the middle of the new open space.

Inside the new pavilion, a large atrium steps down to the retail concourse below grade while accommodating seating and a gathering area for users of the building. A ramp bridges across the atrium, providing access to the office tower above. All spaces would be universally accessible, contrary to the terraced landscape currently in place.

Along Orde Street, which currently is lined by a long concrete wall punctuated by garage doors and service entrances, the entrance to the residential lobby will provide some animation on the sidewalk, while a planned 3-metre setback of the building will increase the width of the sidewalks. As well, in addition to two existing tunnels that connect to the Princess Margaret Hospital on the south side of Orde, (and who occupy space in the existing building), a new bridge is being contemplated that would increase connectivity between the hospital and the office tower.

The Panelists were very encouraged by the presentation, applauding the remediation of the “forlorn” landscape around the building and complimenting the unique form of the tower, and offered some suggestions to improve the proposal even further.

Many Panel members pointed to Orde Street as a potential weak point in the proposal. The street has a very narrow right-of-way, meaning the lower residential floors of the tower would be quite close to the hospital tower across the street. Some suggested perhaps exploring further setbacks on the lower portion of the tower to mitigate this. The Panelists also felt that there was still too much of the Orde frontage that was composed of a concrete wall, and suggested that the design team continue to explore more options of making the building more transparent at ground level.

Several Panel members also expressed the desire to have the entrance to the TTC subway station be incorporated within the building rather than as a standalone pavilion, which would create even more open space on the sidewalk to further enhance the public realm. When asked, KingSett indicated that there had not yet been discussions with the TTC about relocating that entrance. While many advocated to house the subway entrance within the building, a couple of Panelists liked the pavilion where it was, as it was a very clear signal identifying access to transit. It was suggested that streetcar users be accounted for in the plaza design as well.

Other suggestions included finding more ways to engage the new entrance pavilion with the sidewalk, as currently all retail is accessed through the building with only a blank glass facade facing the street, and perhaps expanding the residential amenities – located on the same level as the new rooftop conference centre – onto the adjacent office tower roof to take advantage of that space. Panelists also wondered if there was more to be done to improve the full-height solid concrete wall of the existing office tower that faces south and west, already improved by the addition of the residential tower, by perhaps adding new windows.

Overall the Panel was impressed and enthusiastic about the design, and voted unanimously in support of the project.